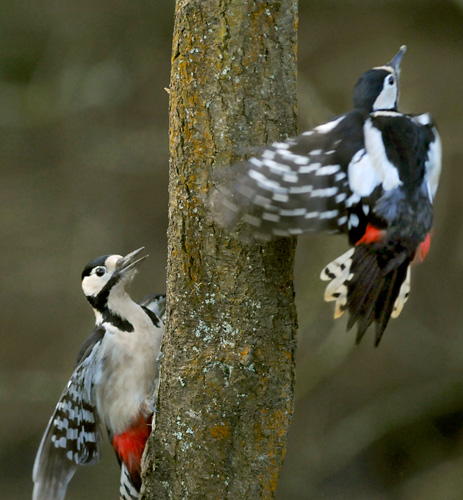 Typically, after questioning the whereabouts of the female Great-spotted Woodpecker, she arrived over the weekend! Again, not as frequently as the male, but she was in. In fact on one occasion threeÂ  ‘peckers’ were down in the feeding station all together, two males and the female. One of the males spent a good deal of time chasing the female around. I have smeared some feed on one of the trees that they have been using as a staging post before coming on to the feeders, with the idea of holding them there for a little while, giving a longer time to photograph them. I would focus on one of the birds if they landed on that particular tree and hope that the other may come in and begin the chase from there. As soon as any movement occurred I would press the shutter and hope! Lots of nothing but if you stick at it you may be lucky.

I also managed a shot of the male in flight on this occasion. I had focused on him on the green mossy area and pressed the shutter as soon as I detected any slight movement. Sometimes nothing happens and you have ten frames or so of the same image, the bird not having moved at all. Sod’s law kicks in as soon as you let your finger off the shutter, or the camera takes a breather and he takes flight. Occasionally though you might strike lucky and get what you are after. 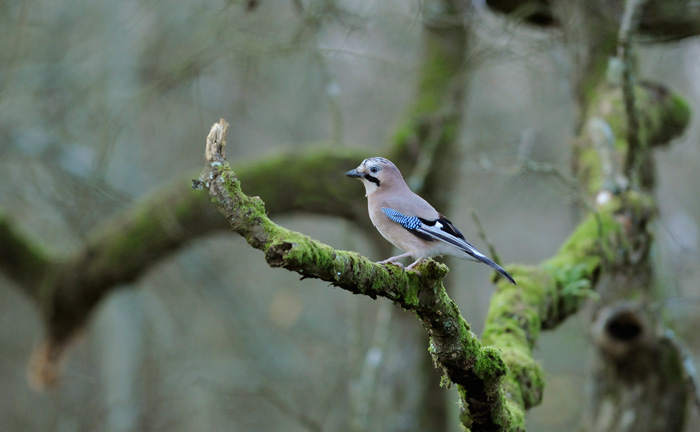 It was a good weekend with everything showing at sometime. The Greensandpiper made a fleeting appearance – just about got a shot of it, but lots of branches and wire fencing in the way! Kingfisher and Sparrowhawk flew through the feeding area and a Jay briefly alighted on one of the logs before landing further away but still very photographable.

I was going to start the construction of a temporary hide just under the bridge this weekend but the river was too high. I had the ladder and spades in the car but it will have to wait until the water drops a little, or I need to buy a pair of waders! I have located a spot that will give good views over a fair stretch of the river and allow me to work with some of the river species.